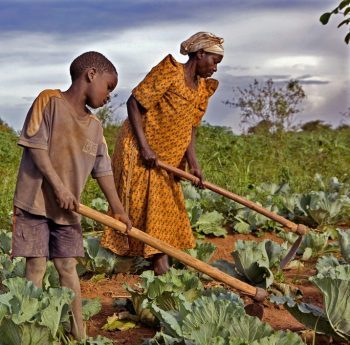 When a strongly worded report by the U.N. Commission on Trade and Development (UNCTAD) was published in 2013, about the need for an immediate shift in our agricultural practices to avoid serious consequences, it largely fell on deaf ears in the United States. Through the examination of agricultural practices worldwide, the U.N. discovered that unless we radically transform our current food system, food insecurity, drought and social unrest will become the norm rather than the exception. But the report didn’t just address the severe ramifications of using harmful methods of agriculture, it also provided concrete solutions.

Wake Up Before it is Too Late

“While Monsanto and others continue to use their multi-million dollar PR budgets to push the narrative that GMOs are needed to “feed the world,” an oft-overlooked report released in 2013 by the United Nations tells a completely different tale: that small scale organic farming is the key to feeding the world and improving food security for the needy after all.” ~Nick Meyer, Althealth Works

Over sixty experts from around the world contributed to the U.N. report, “Trade and Environment Review 2013: Wake Up Before it is Too Late,” which urged countries to adopt small-scale farming and food systems, along with farm diversity and the reduced use of chemical fertilizers. It also noted the need to reform global trade rules, which support Big Ag style of agriculture.

The UNCTAD report highlights key areas for transforming our agricultural systems, including:

“This implies a rapid and significant shift from conventional, monoculture-based and high-external-input-dependent industrial production toward mosaics of sustainable, regenerative production systems that also considerably improve the productivity of small-scale farmers,” the report concluded.

Even though governments like the United States have turned a blind-eye to the implications and recommendations of the report, people and communities around the world have already begun to recognize how a shift to local, small-scale, organic farming can dramatically protect the planet and its inhabitants.

The Power Behind Small-Scale Farming

Celebrated as a technological triumph, industrial agriculture gained a foothold in the American landscape after World War II, claiming these massive single-crop farms and animal production facilities would help to feed the world. However, in the decades that followed, farmers and scientists, along with policymakers, began to realize intensive monoculture is a dead-end — for the environment, public health and food security. In short, this chemically intensive food production method is simply unsustainable over the long term.

“Intensive monoculture depletes soil and leaves it vulnerable to erosion. Chemical fertilizer runoff and CAFO wastes add to global warming emissions and create oxygen-deprived “dead zones” at the mouths of major waterways. Herbicides and insecticides harm wildlife and can pose human health risks as well. Biodiversity in and near monoculture fields takes a hit, as populations of birds and beneficial insects decline.” [source]

This is where the brilliance of local, small-scale organic farming comes in. When the selling of local food takes root in communities, everyone wins — the farmers, consumers and environment. Since the food doesn’t travel long distances, it retains more of its freshly picked nutrients, which is good news for health. Local transport, compared to long distance transport, also radically slashes CO2 emissions, helping to protect the environment against global warming. And farmers benefit by cultivating solid relationships their customers, whether it’s a chef, local grocery store or people shopping at the farmer’s market.

Moreover, Beyond Factory Farming gives us additional food for thought about the perks of small, local organic farms:

Whichever way we look at it, local, small-scale organic farming is the number one solution for many of the food security, environmental and human health issues that we face today. Fortunately, people across the nation and throughout the world are waking up to this fact — and taking back our food system, one small organic farm at a time.