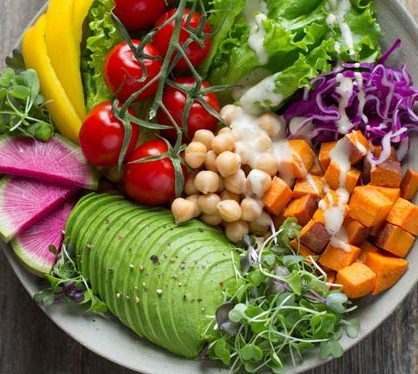 One answer to the climate crisis is on our plates, according a special report commissioned by the U.N.

The report released Thursday by the Intergovernmental Panel on Climate Change (IPCC) is the first comprehensive look at how land influences climate change, and vice versa. The findings? Land use — specifically how we grow, get and eat our food — is a major driver of climate change.

Humans are exploiting lands at a rapid rate, and it’s catching up to us.

“The food system as a whole, which includes food production and processing, transport, retail consumption, loss and waste is currently responsible for up to a third of our global greenhouse gas emission,” said IPCC Co-Chair Eduardo Calvo Buendía, at a press conference Thursday morning.

A hotter world is primed for more droughts, wildfires, insect outbreaks and extreme weather events, making it harder to grow the food needed to sustain a growing population, one that’s expected to hit 10 billion people by 2050.

Land has historically been a powerful carbon sink, absorbing and storing excess carbon dioxide and buffering the effects of climate change. Currently, land absorbs 29 percent of all human-made greenhouse gas emissions. If we’re not careful, however, land may shift from a carbon sink to a carbon source, fueling our climate crisis rather than defending us against it.

If that happens, we put increasingly vulnerable communities at risk. If we hit 1.5 degrees Celsius of warming by 2050, habitat degradation is expected to affect 178 million, the report stated. If we hit 2 degrees, 220 million people will be threatened by water stress and drought. The people most affected will be the elderly, the very young, women and low-income populations.

Like other climate change problems, there is no one silver-bullet solution. Instead, the report recommends a collaborative approach that combines policy, farming and individual consumer choices.

“The level of risk posed by climate change depends both on the level of warming and on how population, consumption, production, technological development, and land management patterns evolve,” the report said.

But it’s not just farmers who must change their actions. Everyone must play a role in fixing our food systems — from policymakers and city planners to private sector companies and especially consumers. At the individual level, we need to change our eating habits. Every decision we make at the grocery store sends a message to food manufacturers.

One immediate choice you can make, the report suggested, is to invest in a more plant-based diet. This message aligns with Earth Day Network’s Foodprints for the Future campaign, which drives home connections between food and climate to encourage accessible, affordable, low impact plat-based diets.

“Balanced diets, featuring plant-based foods, such as those based on coarse grains, legumes, fruits and vegetables, nuts and seeds, and animal-sourced food produced in resilient, sustainable and low-[greenhouse gas] emission systems, present major opportunities for adaptation and mitigation while generating significant co-benefits in terms of human health,” the report said.

Animal agriculture puts a lot of stress on the environment, using many natural resources and producing large amounts of methane, an extremely potent greenhouse gas. The U.N. report stated that “a shift toward plan-based diets” is one of the most significant ways to reduce greenhouse gases from the agriculture sector.

To cut emissions, we also need to decrease our food waste, the report noted. Currently, 25 to 30 percent of the world’s food is lost or wasted. All that food has a big carbon footprint — if food waste were a country, it would the world’s third largest emitter of greenhouse gases, after the U.S. and China.

Dietary habits, of course, are more than personal decisions. Diets are driven by availability and affordability of food, geography and cultural habits. That’s why policy must also be part of the solution. We must enact policies that operate across the food system, cutting back waste, influencing food choices and enabling more sustainable land-use practices.

“Such policies can contribute to climate change adaptation and mitigation, reduce land degradation, desertification and poverty as well as improve public health,” the report said.

Additionally, we must invest in innovation and diversity in land management practices. For the first time, the IPCC specifically referenced indigenous people and their knowledge of local land use practices to overcome challenges of climate change, food security and land degradation.

With all this in mind, we need to act fast. Simply adapting to a warmer world won’t cut it if we wish to avoid a climate catastrophe.

“Delaying action as is assumed in high emissions scenarios could result in some irreversible impacts on some ecosystems, which in the longer-term has the potential to lead to substantial additional [greenhouse gas] emissions from ecosystems that would accelerate global warming,” the report said.

Our climate crisis is growing each day, but it’s not insurmountable. As the report explained, by acting across sectors, we can curb climate change while seizing the benefits of sustainable development, like bolstered economies, reduced inequality and better health.

The power is on your plate. Join Earth Day Network’s Foodprints for the Future campaign to learn how you can reduce your carbon footprint, one bite at a time.